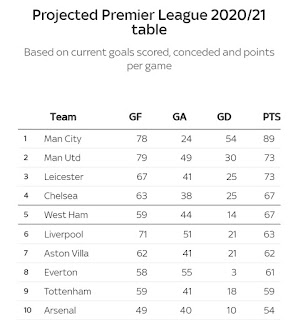 As West Ham head to Old Trafford for a crunch tie against fellow top four hopefuls Man Utd Sky Sports have produced a table predicting the final positions in what is turning out to be a fascinating battle for Champions League action next year.

However, Hammers fans will be disappointed to learn that the computers reckons that they will be edged out into fifth, with Man Utd, Leicester and Chelsea grabbing 2nd to 4th spots.

The table is based upon a complicated algorithm that analyses points per game and remaining fixtures. However, as we all know the lottery of injuries and key refereeing decisions are just as important and will surely impact upon final standings.

The Hammers currently look ok in terms of player fitness but with a thin squad it would only take an injury to any of Rice, Soucek or Antonio and the wheels could come off as they lack cover in central midfield and foolishly failed to bring in a replacement for Seb Haller in January- a decision that could ultimately be the crucial difference between making the top four or not.

However, the Hammers recent form gives rise for optimism as wins against Spurs and Leeds with a very creditable performance away to Man City highlight that they won't be easily deterred. Today's game, along with the six-pointers against Arsenal, Leicester and Everton will be key, while Moyes men need to be ruthless in their final run in against Brighton, West Brom and Southampton.

The bookies are in agreement with Sky's computer with top four odds of 1/9 for Man Utd, 2/7 for Chelsea and 8/13 for Leicester. The Hammers are a decent bet at 11/4! Spurs are also 11/4 but are 3 points behind the Hammers, with Harry Kane's fitness an ongoing concern and also a tough run in. Liverpool are 7/2 but need to get into gear quickly as they are 5 points behind West ham and have played a game more. The additional burden of their current Champions League campaign may prove too much for Klopps injury ravaged side. Everton are 7/1 but have a very tough run in and will need to get good results against Spurs, Arsenal and Villa and will almost certainly need to beat the Hammers when they travel to London in early May. Villa have gone off the boil since losing Grealish and ate probably too far behind with a tough run in.

All in all its going to be a thrilling run in and if Moyes men can maintain their form and avoid injuries then they will be in there at the death.