Miserable Hammers Get it all Wrong 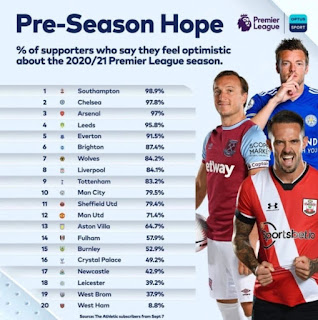 As West ham continue to push for a Champions League qualification spot all sorts of explanations are being cobbled together as to how the unfancied and unhappy club could have transformed into serious top level contenders.

While the arrival of a series of brilliant signings in Soucek, Coufal, Dawson, Bowen and Benrahma has certainly been a key factor, others have suggested that the absence of fans has actually helped David Moyes men!

While there has undoubtedly been significant tension between the owners and fans for a number of seasons, it has to be recognised that when Messers Sullivan and Gold took over the club it was in financial freefall, relegated and with a fractured squad.

Wind forward to the present and West ham are financially secure, flying high towards European footy and with a happy and talented squad. Add to that the best value season tickets in the league and you might expect fans to be overflowing with love towards the club and its management.

A fans poll just before the season began illustrates a remarkable lack of optimism amongst the Hammers faithful with less than 10% feeling positive about the season ahead - more than 4 times lower than the next most negative fans of West Brom!

Its true that the poll was taken just as Grady Diangana left but in retrospect the fee was almost enough to cover the cost of Coufal and Soucek, while Diangana has contributed very little to a poor season for the Baggies.

All of which raises the question of whether Hammers fans are a bit prone to seeing the glass half empty and maybe that impacts upon players performances? Many fans would counter that the owners have been poor at communicating with fans and have reneged on key promises.

Either way, It's a real pity that fans cannot get to attend in person while the team enjoys such success.