Its Been Since Late September And We Really Need You Back in Goal... 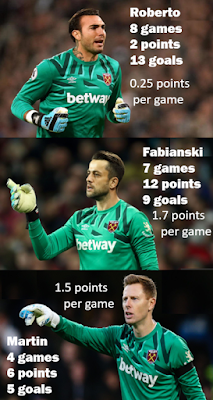 Lukasz Fabianski looks set to return in goal today after over three months absence as West Ham face a crunch ties against Leicester City in the evening kick off. The Hammers goal-stopper has been out of action since late September when he sustained a hip muscle injury in a 2-2 draw with Bournemouth.
The Hammers form has nosedived since his injury with just two wins in twelve, as number two keeper Roberto has had a torrid and error-strewn time that required promotion of number three keeper David Martin to the starting berth until he too experienced an injury!
A simple review of our stats with and without Fab tell the story of a declining season as the Hammers have slid down the table after a promising start when the Polish Ace was fit and between the sticks!
As Rod Stewart might sing to his classic track ‘Maggie May’:
‘Wake up Fabby, I think we’ve got something to say to you
It’s been since late September and you really should be back in goal!
Roberto keeps us amused
but we seem to always loose
Oh Fabby we really have cried as they’ve scored’
Let’s hope he’s back today and we get a much-needed win!
COYI!!!!