Traitor-Rator: Who is West Ham's biggest Ever Judas? 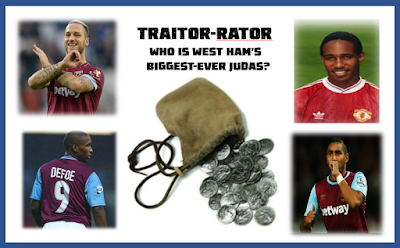 After all of the positivity of last season when after a poor start the squad found its mojo and delivered a host of good results playing attractive football, once again we now face falling back to where we started.

With Marko Arnautovic's departure, the club are struggling to identify a forward who can provide the regular supply of goals that would allow the club to push to the next level and maybe even European football.

With the Maxi Gomez deal all but dead, its hard to see who might come in. As a much needed distraction, let's focus our fury on Arnie and ask - is he the worst ever Judas to play for the club?

To add a little objectivity, we have rated our top four traitors according to the following characteristics;
1. How two faced was the departure?
2. How self serving was he in making it happen?
3. How much damage did it do to the club at the time?
4. How unpleasant was he after the 'escape'?
5. Looking back, can there be any forgiveness?

Let's start with that 'Big time Charlie', Paul Ince. A childhood Hammer, Ince was one of the few positives to emerge in the Post-Billy Bonds era and despite decent personal performances was part of the relegated side in 1989 which saw John lyall depart after 15 years at the helm. Ince aws photographed in a Manchester United shirt to save him having to come back from holidays for a new signing photograph for the press, the deal was postponed as he failed the initial medical. However, the tabloids still published the picture and all hell broke out! Ince escaped after a second medical and one game into the 1989-1990 season. The departure was badly managed but Ince has cited that at 21 years old he was naive. In truth, the club was in a mess and had a yoyo period for the following 4 seasons getting relegated and promoted twice and Ince was a wanted player at a selling club. He enjoyed playing the panto villain in matches between Man utd and the Hammers but has not spoken negatively of the club over the years.

Next up is Jermain Defoe. Also 21 years old, he was a bright young star of an amazing Hammers squad who somehow managed to get relegated in 2004 with a squad teeming with stars but low on luck! While the Hammers can claim the greatest ever escae from relegation in 2007, 2004 was surely the stupidest relegation from the Premiership? Defoe reacted badly to the relegation and within 24 hours made a written request for a transfer. Distressed fans focused their annoyance on his insensitivity and he was turned down by the club. He stareted the following season at West Ham but refused to sign a new contract and had an obviously poor attitude, picking up three red cards in 22 appearances before the club lost patience and sold him to Spurs. Over the years he has repeatedly  apologised to supporters for mishandling the move due to his young age and often expressed a desire to return to make amends.
1. How two faced was the departure? 2/5
2. How self serving was he in making it happen? 4/5
3. How much damage did it do to the club at the time? 3/5
4. How unpleasant was he after the 'escape'? 1/5
5. Looking back, can there be any forgiveness? 1/5
Total score 11/25.

Et maintenant, c'est Dimitri Payet. Surely the most naturally gifted Hammer of recent times. Payet arrived in June 2015 and quickly established himself as a fans favourite with a series of impressive performances that woshortlisted him for PFA player of the year while he received the Hammer of the year award. A lucrative new contract arrived then suddenly in January 2017 (aged 29) he refused to play for the club stating that he wanted to return to Olympic Marseille. After much huffing and puffing he left for a modest fee. He later stated that he felt the club lacked ambition and that he was 'bored'.
1. How two faced was the departure? 2/5
2. How self serving was he in making it happen? 5/5
3. How much damage did it do to the club at the time? 4/5
4. How unpleasant was he after the 'escape'? 4/5
5. Looking back, can there be any forgiveness? 4/5
Total score 19/25.

So finally, Mad Marko Arnautovic. We cant say that we weren't warned by Stoke fans after he smahed his way out of their club to join the Hammers. He arrived in Summer 2017 and after a poor start switched to a new central attacking role that proved a piece of David Moyes genius. 11 goals and Hammer of the year award followed. On to this season and he started getting restless before Christmas as rumours of Chinese interest surfaced. After much stealth, using his agent brother Danijel to voice the Mr Hyde half of his persona, he seemed placated by a big new deal. He denied ever wanting to leave but then submiited a transfer request in mid Summer and forced a bargain purchase for Shanghai SPG where he will presumably see out his career being paid huge money in a pointless league. As yet there have been no noises from Marko about his departure but the series of incredibly two-faced statements in his final six months will surely annoy fans for a long time! The difficulty replacing him is currently hurting the club but Manuel Pellegrini has a talent for bringing in top players so we wait in hope!

Wow!!! A draw between Marko and Dimi!!! Arnie will be furious as he loves to hog the limelight. It's interesting how our old skool traitors are lightweight compared with the two-faced mercenaries of the modern era!