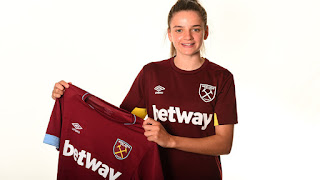 Irish eyes were smiling again at West Ham as  Leanne Kiernan made a memorable return from injury with an impressive performance and a goalscoring hat-trick in an 8-1 thrashing of poor Huddersfield Town.

The 19 year old striker hails from Bailieboro in Cavan and joined the Hammers in the Summer from Shelbourne FC in Dublin has been unlucky to be out after sustaining an injury in her last performance on September 30th.

The skillful and pacey striker marked her return with a Woman of the match performance as the Hammers booked their place in the quarter-finals of the SSE Women’s FA Cup.

Speaking to WHUTV she revealed “I’m just delighted to be back playing football. It’s great to get on the scoresheet and get the hat-trick but it’s about the team at the end of the day. We all played well and I’m really happy.”