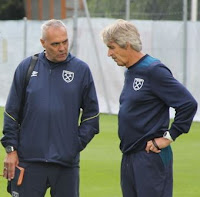 It all started so well for the VERYWESTHAM crew, catching the 7am flight from Shannon to Stansted and then off to a family event in East Ham before making the walk to the London Stadium. The atmosphere was a tad restrained, but understandably so given our three opening defeats. Still , Arnie was fit and we were at home, right?

Wrong! After 15 minutes I wondered if the lads had been segregated in training as we were struggling to complete simple passes while Wolves looked sleek. After half an hour it was obvious that we lacked leadership and, for all his lack of pace and vulnerability beside Wilshere, we were missing Mark Noble. At half time I wondered how many Pellegrini would substitute at the break. Fab, Arnie and Diop aside, we looked lacklustre.

No changes at half time but we had a decent first 20 minutes in the second half before we slackened off and Wolves took over again, creating three really decent chances before Arnie almost stole a winner with a break against the run of play. Wolves were saved by their goalkeepers's face and thereafter we looked to have settled for a draw.

Until Wolves scored in injury time. In all honesty, it made for a fair result. We look lost, almost Abram Grant level of bewildered. Hmmm.  It's early days but with a series of tough games ahead you'd have to wonder where any points might be coming from. My sense is that the noard will stay calm for a dozen games. Hopefully we will do a typical Hammers and beat a few big boys to kick start things. Failing that, the Claret n Blue cup against Burnley is looking like a big big game for Pellegrini!

Crowd Rating 4/10. In fairness, we had very little to get energised by in this drab performance. It was all too easy for Wolves.