Another Injury But Feel That Silver Lining... 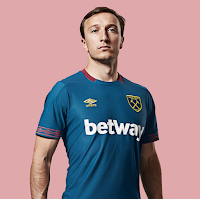 As West Ham prepare for their annual Wedgying away to Arsenal, a gap has appeared in the clouds - one with a definite silvery tinge!

Manuel Pellegrini announced that Captain Claret, Mark Noble, will be unavailable for the Arsenal game due to a back injury.

Like most Hammers fans, I love Nobes and despite his advancing years he can still bring a canny football brain to proceedings, as we witnessed during our relegation- dodging run in to last season!

However, as a midfield partner for Jack Wilshere, many observers expressed their concerns about a lack of pace in the West Ham engine room, and the displays against Liverpool and Bournemouth have suggested that their pessimism is well founded. It's no coincidence that Cheik Kouyate's dip in form last year coincided with a dwindling partnership with Noble.

The big question on everybody's lips is who will come in as a replacement? Pedro Obiang seems out of favour, while new recruit Carlos Sanchez is catching up on in match fitness. Personally, I hope Decky Rice comes in from the cold as his energy and physical presence can hopefully stunt Arsenal's free flowing midfield.

So far, Pellegrini has been tight lipped on the matter, but after a poor start to his tenure it looks like any number of changes are possible as we try to identify our best starting XI.