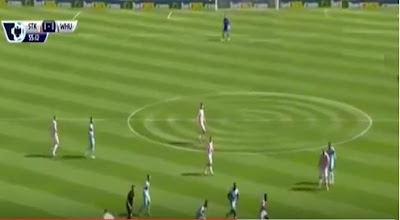 Slaven Bilic may have slain all the Premiership Goliaths this season but unfortunately his powers could not extend as far as preventing the Hammers from succumbing to yet another 'Stoking' at the Brittania stadium yesterday. The time-honoured tradition of the Potters seizing unlikely victories continued as West Ham spurned repeated opportunities to bury a lacklustre Stoke side.
However, with a series of unusual occurences, including three consecutive goal line clearances, many observers have drawn attention to the weird and unsettling pitch topiary at the Stadium. The centre circle appearing to house the footballing equivalent of a Crop Circle, creating a sense of nausea in those watching on television.
Long associated with the paranormal, both Stoke and the crop circle phenomenon remain a mystery to scientists. However, the known link to witchcraft and other foul behaviours has prompted the FA to consider launching an investigation into goings on at the Brittania.
Crop circles contain a measurable EM field from which can ripples of energy flow outwards from the epicentre of the designs - this demonstration that the crop circles are living, breathing, organisms raises the diabolical possibility that Stoke were fielding an extra player during the game!