Time to bring on Gretzky? 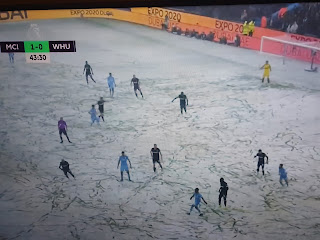 It's all gone a bit bonkers at the Icey-had stadium as incessant snow has changed the game into an ice hockey match!

It's bordering on farcical as the ball is stopping in the depths of snow!

None of which has bothered Moyes' men who are holding firm against Man City and can feel unlucky to be 1-0 down at the break.

You'd wonder whether this is a game suited to Coufal and Kral - the latter a veteran of Russian league footie.

The Hammers will look to keep it tight and hope to take one the the decent number of chances they are creating.

Wayne Gretzky may not be available but surely the ref needs to find an orange ball for the second half!