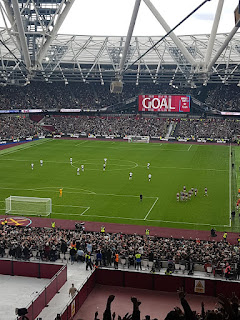 It was all too easy for the Hammers this afternoon as a Spurs side lacking in ambition and craft were overpowered by a patient West ham performance. Mikey Antonio popped up with the winner in the 73rd minute to top off a performance in which Spurs were gifted lots of pointless possession while the Hammers had all the shots on target.

Fabianski : In truth he'll be shocked to have had so little to do but he made a few important first half saves look easy and finished off with a bossy catch from a hopeful Spurs punt into the Hammers box. 8/10

Zouma: Immense. As he said in midweek, Kane is a picnic when you train with Antonio every day! 8.5/10.

Cresswell: Superb again. When we finally got a corner he send in a beauty. Tenacious in defence. 8.5/10

Soucek: Having no luck with grabbing a goal but they will come again. Big presence in a midfield that gave Spurs no oxygen at all. 8/10.

Bowen: What a nightmare to play against! Constantly pushing for a break and has developed into a clever head when he gets the ball. Not getting k ocked off the ball like he used to. 8/10.

Fornals: Sooo intelligent on the ball and a really buzzybee in defence. The movement and cohesion between Pablo, Jarrod and Said is a joy to watch. 8.5/10