Its time to stop this penalty madness 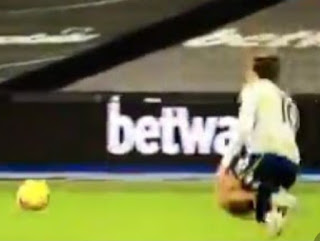 The current season is surely the weirdest of all time with empty stadia and the growing cancer that is VAR. Both players and fans are fed up of the increasingly pedantic application of rules to the exclusion of common sense as the bureaucrats have become empowered by a weapon that is bringing a farcical level of precision to gameminding.

West ham's game against Villa on Monday was a classic case in point. Traditionalists will know that the offside rule is meant to prevent the goalhanging antics thst characterise most schoolyard games of football and in essence if a forward is in line or close to it with the last defender then they should be given the benefit of the doubt and deemed on side.

The law was never intended to be applied with the sliderule precision we saw for Villa's (almost) late equaliser. After 5 minutes of digital jiggerypokery the goal was deemed offside by a hairs breadth margin. Any sane fan would recognise the ruling, and its application, as madness. There really is a difference between what you can and should do in life!

The VAR nonsense is also reflected in the exponential growth of 'soft' penalties. So far this season the Premiership haa amassed 46 after just 10 games as we are on course to more than double the number from recent seasons. Do fans really want soccer to become a diving competition? FA supremos might do well to learn from the experience of rugby where in the past penalty kicks became too dominant and they had to increase the points value of tries. In short, penalties should be a rare occurence not a routine intrusion into the game.

And then there's the diving. Jack Grealish is a really exciting talent - which makes his diving antics all the more difficult to accept. The footage from Monday night's game of his 'delayed reaction' to a mundane challenge with Pablo Fornals is disturbing. For me such behaviour should be prioritised for punishment and VAR provides the perfect tool to discourage this blatant cheating. A 2-3 match ban would surely send out a much needed signal.

The real purpose of VAR and related technologies is to prevent teams getting an unfair advantage, especially where such behaviour is deliberately contrived. If officialdom insists on intruding into on field matters then lets prioritise behaviour that turns many fans away from the game - one suspects that any accurate poll of fans would put diving at the top of the list of behaviours that need to be discouraged.

As for Jack Grealish, the lad needs to focus on what he is best at and on Monday night's evidence acting isn't amongst his better skills. After the Hammers very fortunate win one had to feel sorry for Villa but when you watch Grealish's embarrassing antics and his manager's post match comments maybe the rule of karma justice was applied.