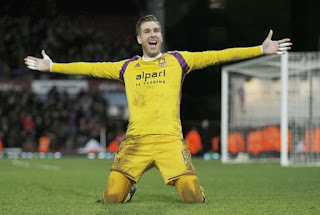 Ok, so we made a gallant comeback which will undoubtedly provoke calls of 'why do we have to go 3 down to start playing?' But in reality, West ham looked lacking in confidence and bereft of ideas for the first hour of Today's game. Noble and Rice were trying to get us going with some passionate tackling, but the rest of the team looked strangely sedate for what is our big derby game of the season.

And then there was the Alan McKnightmare-esque performance of Roberto. Enough said.

We are without a win in 8 games and sliding down the table....you might even say we are in freefall.

One fellow fan joked as we were leaving the stadium today that at least we won't have a boring run in this year. He's sadly right - we are almost certainly going to be at least up to our waist in relegation troubles.

And with that in mind, many fans are already nervously checking our run in - the good news is that  it looks relatively 'kind':

It's hard to see us turning things around until January opens the door to new recruits as we have Chelsea, Arsenal, Liverpool, along with Palace and Wolves away, such that the Southampton game looks like a relegation six pointer already!!!

Top Marks to the bloke giving it socks with Karaoke to lift the spirits as we left the ground. Right now we are truly singing the Claret n Blues...