It’s that time of year again when footie supporters get to find out what their favorite club expects them to wear to ‘casual’ social engagements and the like, and once again the Happy Hammers can be not just relieved, but enormously ecstatic! Our boys have really got it right this time, with a sensational piece harking back to the glorious days of the mid-eighties and with just the right amount of white to complement the glorious claret and blue.


All of this has generated considerable curiosity amongst the Bubbles faithful as to who is responsible for this sartorial delight? Insiders at the Boleyn have confirmed today that the new kit was personally designed by top International fashion mogul, the one and only Mugatu! However, this is a tale that could have been very different were it not for the firm stewardship at the Boleyn! It is rumoured that Messers Sullivan and Gold were unimpressed with Mugatu’s initial efforts and only after some considerable reworking did the current strip emerge.

So contented Hammers can confidently turn their attentions to the plight of fans of rival clubs, and not surprisingly there are some embarrassing examples for the Bubbles boys to feast upon. For Arsenal, the fragile French temperament has once again backfired upon them with their new away kit designed by JP Gautier likely to provoke endless laughter from opposing supporters! The kit is so noncey that it is already widely predicted that the likes of Jack Wilshere anf Aaron Ramsay are already plotting their escape from the girlie-power zone that exists at the Emirates.


Meanwhile, news is emerging from abroad that further ridicule and scorn awaits Hammers reject Julien Faubert  who now plies his trade FC Bordeaux in the French league and will thus be forced to wear this outrage on away days next year. Thankfully his time at the Boleyn will have toughened him to the wicked taunts that inevitably await. 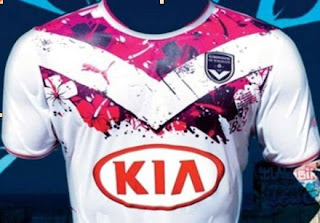 In other developments, it has emerged that fans of Liverpool have not only be denied the services of Andy Carroll next year, but have also been robbed of any lingering self respect by the American-owned clubs determination to squeeze every last penny from it’s beleaguered fans by introducing separate kits for the offense and defense – no doubt Glen Johnson and the lads will feel nice and comfy in their new outfit when they fall asleep again during key matches next season. 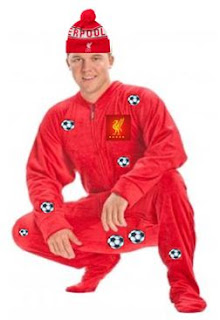