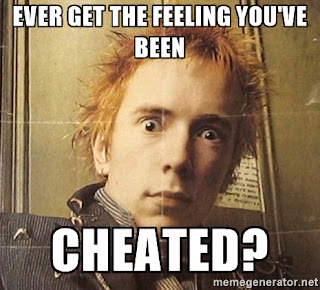 Over the years Hammers fans have felt hard done by with dodgy refereeing decisions that have robbed us of the massive success that we undoubtedly deserve.

As such, the arrival of VAR was seen as the saviour. At last, a reliable and fair system to protect clubs from the injustice of refereeing bowlers.

But no, VAR has been a disaster. While pundits enjoy the opportunity to waffle on about VAR as it creates a distraction from having to actually tactically analyse games, fans who attend games have copped that VAR has ruined the joy of scoring (nothing is a goal until VAR says so), added an American football type stop start feel to proceedings, and still keeps getting it wrong.

Glenn Murray's goal today was a prime example of how VAR is ruining footy. Not only did it cause a 5-6 stoppage while the VAR folk stumbled to a decision, but even then it was wrong as the ball clearly touched off the strikers arm before settling nicely for him to bag an unlikely equaliser at the London Stadium! Compared to Declan Rice's intervention at Sheffield united, Murray's was a stone cold handball.

Which leads us to only one possible explanation- there is s conspiracy afoot to relegate West Ham from the Premiership, probably overseen by the Bilderberg group who control other important World affairs.

Clearly the 12 foot high aliens have taken a dislike to West Ham and want us removed from top flight football. Seizing control of VAR has allowed these repulsive reptilian overlords to orchestrate the destruction of East London's finest club.

Murray's goal condemned the Hammers to the relegation zone and with Liverpool and Man City (both away) to come the aliens will have their evil way. At this stage it is abundantly clear that all resistance is useless and we can only pray that the monsters will be satisfied with forcing us into the Chumpionship as, with their infinitesimal power, this could end in League one purgatory.

In the words of John Lydon as he brought the greatest ever rock n roll band to a conclusion "Ever get the feeling you've been cheated?"