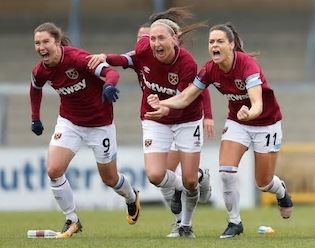 Yowzah!!! Its Wembley on May 4th for West Ham as the ladies team brushed aside Reading today after a tense penalty shoot where they came out on top 4-3 after drawing 1-1 in the 90 + 30 minutes ET.

Rachel Furness' powerful header gave Reading a deserved lead just after half time but Hammers Swiss forward Alisha Lehmann pulled them level just before the hour. The game then remained locked at 1-1 as Reading missed a penalty and there were no goals through 30 minutes of extra time.
then came the sudden death penalty shoot out in which Cho So-hyun netted the winning spot-kick to send West Ham to Wembley. They will face Manchester City who overcame Chelsea in the other semi final.
The Hammers will have their work cut out against City who are second in the league and have beaten West Ham 7-1 and 3-1 in their two meetings this season.
With Southampton due at the London Stadium at 3pm and the Wembley kick off scheduled for 5.30, it'll be interesting to see if the Premiership game gets shifted or will fans have to make a quick dash across London to catch the ladies in action?
COYI!!!
Posted by Verywestham at 13:34