A Perfect Time to Storm the Bastille 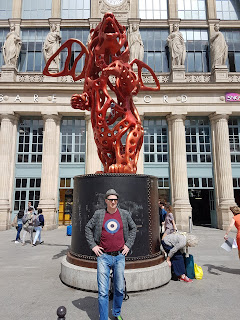 As Arsenal begin the end of the Wenger era the air is stagnant with nostalgia as the Gooners reminisce on the glory days of the so-called 'Invincibles'. In truth, the current Arsenal side has nothing like the capacity of Henry-Viera-Pires to instill a sense of dread into any would be opposition.

However, that said, West ham fans will be glad to move on from Wenger's era during which we have enjoyed very little success against our neighbours from North London. Perhaps that's why a steely Moyes-led Hammers side are 11-2 against for a win even though Arsenal have little to play for while the Hammers are desperate for the points that would ensure our Premiership safety.

Moyes has fielded an unchanged starting XI but both Lanzini and Carroll can be expected to appear before the end. Its uplifting to witness the growth of Declan Rice, who starts again, and along with Arnie has lit up an otherwise difficult season. Mr Rice really looks like a future captain of the Hammers a la Bonzo style.

I am in Paris and will miss the second half. It's currently 0-0 and with a strong bench maybe, just maybe, we can grab something and start a new era of results against the Gooners?