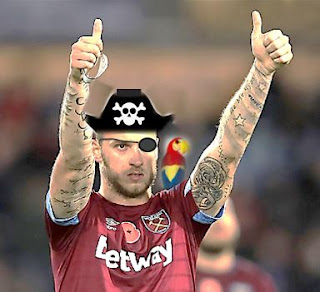 The departure of Marko Arnautovic from West ham two years ago was one that left a decidedly bad taste in the mouth. At the peak of his career in the World's premier league, his exit to the backwaters of Chinese football was a prime example of how money had become too dominant as a force in football.

Having enjoyed the best phase of his career in a new role as a striker, the Austrian seemed happy but behind the scenes there were problems and in the end Hammers fans were happy to see him go as in his final few months he seemed distracted and lost his form.

Since joining Shanghai SIPG (now Shanghai Port FC) he has enjoyed a decent spell and maintained a decent scoring average that is greater than a goal every second game. However, the Chinese league is a long way from the Premiership and now two years older Arnie would likely find it difficult back at the top level.

Which makes the gathering rumours that he may be on his way back to West ham difficult to swallow. While fans have been lukewarm about the possibility, its clear that the team and David Moyes harbour no ill will towards Marko.

The upcoming Euros will provide an opportunity to see how focused Arnautovic is. He was the key player in Austria's qualification run, scoring 6 goals and equalling the haul of Robert Lewandowski as Poland and Austria topped group G.

In reality, West ham need to add at least two top quality strikers to their squad - maybe Marko can be one of those. As for leaving China, God knows what it is like living in the country during COVID but safe to say its hardly a whole heap of fun as official statistics point towards a level of infection that would require major restrictions in everyday life.